HAVE WE GOT NEWS for you, folks: In addition to the already-overcompensating lineup for our final show, we’ve just added two names to June 12’s bill that we couldn’t be more thrilled about.

PAUL TOBIN is the writer of the Eisner-winning Bandette, with artist Colleen Coover; his newest book just so happens to be a collaboration with another Comics Underground guest, Ben Dewey. It’s called I Was the Cat, out in June from Oni Press. It’s about a cat. I LOVE CATS. SOLD.

CAT FARRIS is a Portland-based illustrator, web cartoonist, and artist on Dark Horse Comics’ upcoming Emily and the Strangers miniseries; she’ll be presenting her adorable minicomic Flaccid Badger. It’s about a badger. I am… badger neutral, but I LOVE THE WAY CAT DRAWS BADGERS. SOLD. I also love the way she draws tiny Wolverines. 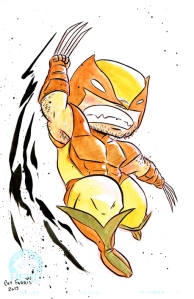 All the details about the VERY FINAL FOR ALL TIME Comics Underground—including who the guests are who aren’t Paul and Cat—can be found right here. It all goes down soon—Thursday, June 12—and we’ll see you there.