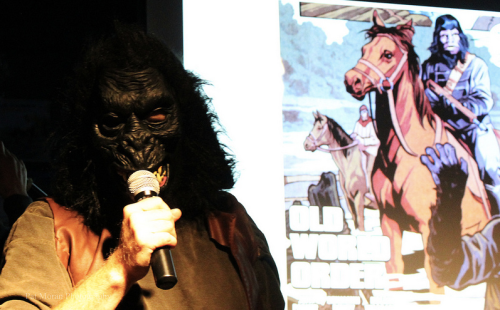 NOVEMBER 14, 2013
This time around, Comics Underground had a theme. Why? Because we wanted to! The theme was “Western,” and it was good.

AUGUST 8, 2013
From a post-apocalyptic super-woman to angry bugbears, this edition had it all. Go ahead, think of something. Anything. Guess what: It was had.

MARCH 7, 2013
We teamed up with Dark Horse Comics—and legendary editor Diana Schutz—for a Will Eisner-themed installment of Comics Underground, in conjunction with Will Eisner Week celebrations happening across the country. Each guest put their own spin on a story from Eisner’s Last Day in Vietnam. Highlights included:

JANUARY 10, 2013
A friendly medusa came out of a toilet! And some other stuff happened.

APRIL 26, 2012
For the Stumptown Comics Fest edition of Comics Underground, we mixed things up a bit with live music and crash course in comic book history—plus an Iambic pentameter-spouting sea creature and a sneak preview of a beloved series.

Want more details? As he did for the first Comics Underground, Christian Lipski wrote up the event for the Portland Examiner.

SEPTEMBER 22, 2011
Comics Underground #2 featured an homage to Joss Whedon, teen witchery, plenty of music, and a peek behind the scenes of an Eisner-winning story. We had fun.

JUNE 23, 2011
The first Comics Underground took place at the Jack London on Thursday, June 23, 2011, and a goddamn delightful time was had by all, except maybe the organizers, who might’ve had a few panic attacks related to technical difficulties that are now all ironed out, promise. Guests included:

You can read the Portland Examiner‘s preview of that first event here.