FOR THOSE KEEPING TRACK, this will be the tenth Comics Underground. Alison and I have put together a lot of these goddamn things, so believe me when I say this: This one is going to be outstanding. We’re stoked to welcome back Kelly Sue DeConnick, who’ll be presenting some stuff from her amazing new book Pretty Deadly. There might be some singing. 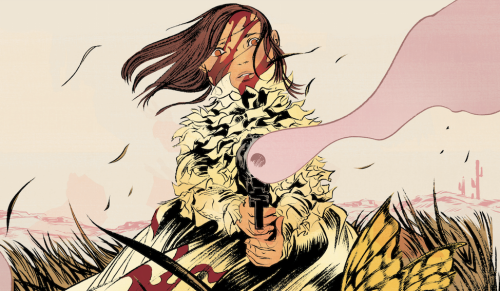 We’ll also be joined by the charming, handsome, and terrifyingly talented Frank Beaton, who—with some assistance from the beloved Atomic Arts crew—will be performing his short story from Outlaw Territory, “Someplace Like Hell.” It’ll be classy!

“Someplace Like Hell” by Frank Beaton and Brent McKee

And we’ll have Dark Horse Comics Editor-in-Chief Scott Allie—who will (A) present a fantastic short story inspired by Serenity, and (B) give attendees a sneak peek at some of Serenity: Leaves on the Wind—the top secret, eagerly anticipated new series edited by Scott, written by Zack Whedon, and illustrated by Georges Jeanty! I’ve already seen some of it, because I’m fancier than you, and… well, how about I just leave this here.

Serenity: Leaves on the Wind by Zack Whedon and Georges Jeanty

Hot damn. This one-time-only, western-themed edition of Comics Underground goes down this Thursday, November 14, at 8 pm at the Jack London Bar (529 SW 4th, Portland). Admission’s $3-5, doors open at 7:30, and I recommend getting there early.