Oh, the holidays. How you sabotaged our every intention of getting this valuable information disseminated a timely fashion. So here we are, a mere day before Christmas, announcing the all-star lineup for the next Comics Underground, taking place Thursday, January 10 at 8 pm at the Jack London Bar. 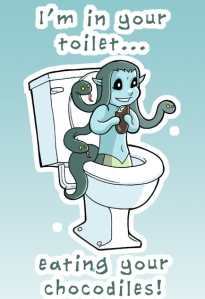 JAKE RICHMOND, creator of the beloved and adorable web comic Modest Medusa, about a tiny Medusa who came from the toilet and loooooves Chocodiles.
(Yes, only three creators instead of four this time—we’re gonna try eliminating intermission, to make more time at the end for the networking y’all love to do so much.
(So! See you there: Thursday, January 10 at the Jack London Bar (529 SW 4th, Portland). 8 pm (doors 7:30ish). Cover charge is $3, which will be waived for menstruating women and tiny medusas.